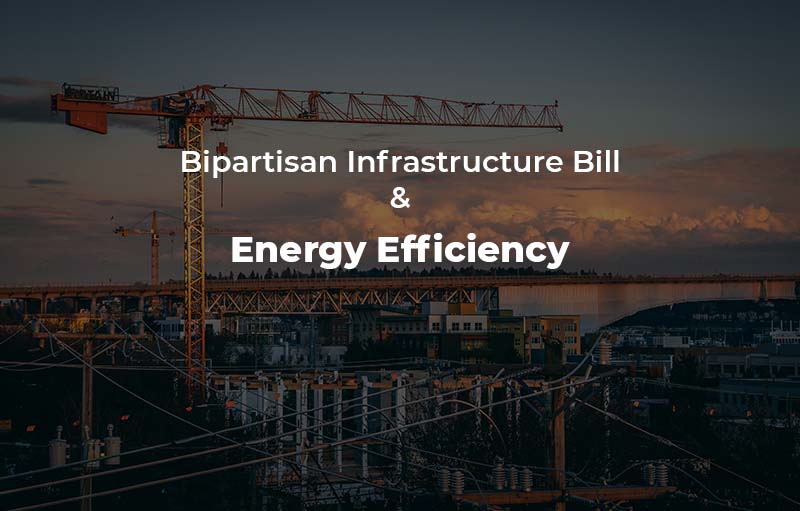 Posted at November 26, 2021h in Rebate Programs by admin

President Biden has signed the Infrastructure Investment and Jobs Act (IIJA), also known as the Bipartisan Infrastructure Package. The bill, roughly 2,700 pages in length, mirrors the bipartisan legislation passed by the U.S. Senate in August, which addresses a range of topics related to environment, energy, and climate policy, summarized by B&D. That bill was adopted by the House of Representatives late in the evening of November 5 after months of fractious negotiations between different factions of the Democratic caucus. It calls for spending approximately $1.2 trillion, including approximately $550 billion in new spending, over the next eight years. In addition to significant spending on “traditional” infrastructure like roads and bridges, the IIJA includes major provisions important to the energy industry, ranging from significant support for electrification of the transportation system to building out the nation’s electric transmission grid and renewable power. The IIJA creates major new investments, and major new programs, touching nearly every aspect of the energy industry.

In the Infrastructure Bill, a Recognition: Climate Change Is a Crisis

For the first time, both parties have acknowledged — by their actions, if not their words — that the United States is unprepared for global warming and will need huge amounts of cash to cope.

When it comes to addressing the consequences of a warming planet, no amount of money appears to be too much, and bipartisan consensus is easy to find. Agreement between Republicans and Democrats to reduce the emissions that are causing the planet to warm is more elusive, as Republicans are largely resistant to limiting the use of fossil fuels like oil, gas and coal.

The infrastructure bill reflects that change in different ways. Some of the money would supercharge programs that already exist, but which experts say are not at the scale to meet the growing threat.

The new legislation includes a variety of programs aimed at promoting energy efficiency, including both new programs and new funding for existing programs. These include:

All these laws tie in with the existing rebate programs for Energy Efficiency that exist in New York City such as PSEG, PACE and NYSERDA. For Building owners, it is a great opportunity to make use of these grants and improve their energy efficiency, reduce the GHG Emissions and comply with various Sustainability Laws as defined by the New York City. Contact us to know more about how you can avail these benefits!

In 2019, The New York City Council passed the Climate Mobilization Act, which included several pieces of legislation aimed to fight climate change. The most impactful of these measures is Local Law 97, which requires most buildings over 25,000 square feet to reduce their greenhouse gas emissions by implementing energy efficiency upgrades and taking other clean energy steps (many beginning in 2024). Concurrently, the Council approved a measure to implement a New York City Property Assessed Clean Energy (PACE) program, allowing New York City building owners to access a valuable tool by which they can finance energy efficiency retrofits and other clean energy measures through an assessment placed on their property tax bills. PACE is an innovative financing tool that enables owners of eligible properties to finance up to 100% of renewable energy, energy efficiency and other resiliency improvements. Financing is provided by private sector funding with repayment terms that match the useful life of the improvements, up to 30 years, with no balloon payment. Owners repay the financing through a special assessment on the improved property. For more information on PACE Financing, contact us!