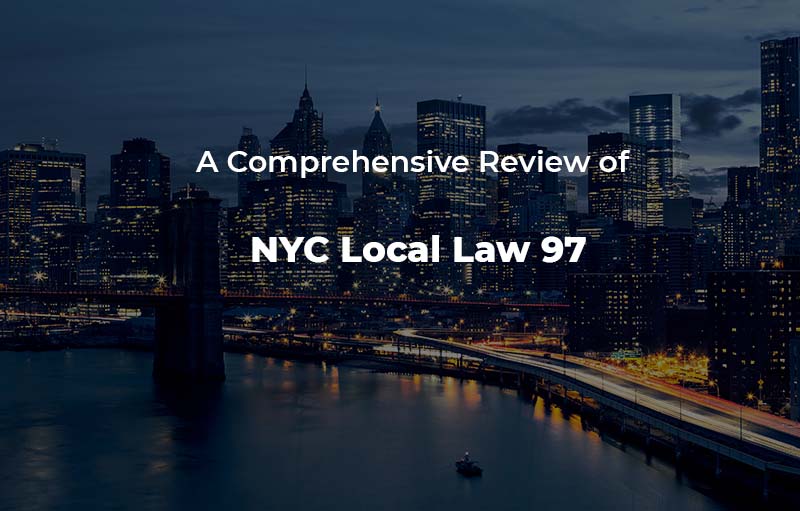 Posted at 12:04h in GHG Emissions by admin
0 Likes

A relentless conversation on reducing carbon emissions has been internationally going on for over 30 years under the guidance of the United Nations Framework Convention on Climate Change. Since its inception, UNFCCC has been working with signatories around the globe towards carbon mitigation, adaptation and finance policy. Further the implementation of the Paris Climate Agreement was witnessed in 2016, truly a benchmark for the City of New York as it has essentially aligned itself with the goals of the Agreement translating to the vision of reducing 80% of the city’s emissions by 2050. The commitment is reflected in various legislations such as the NYC Local Law 97.

In April 2019, the City Council passed the Climate Mobilization Act as part of the Mayor’s New York City Green New Deal. It includes the Local Law 97 as one of the most ambitious plans to facilitate effective de-carbonization. Under this pioneering law, most buildings over 25,000 square feet will be required to meet new energy efficiency and greenhouse gas emissions limits by 2024, with stricter limits coming into effect in 2030. As mentioned, the goal is to reduce the emissions from buildings by 40 percent by 2030 and 80 percent by 2050. The law also established the Local Law 97 Advisory Board and Climate Working Groups to advise the city on how to best meet these unavoidable and now urgent sustainability goals.
The law further incorporates a green power purchase option, feasible timelines and provision for carbon trading between similar building types. It also promises future refinement through the established advisory board – all of which ensures a hard cap on carbon emissions to fight climate change.

The responsibility of complying not only falls on the shoulders of the owners but also tenants. Local Law 97 comes into effect in just three years; therefore, a thorough understanding is imperative for non-compliance. The law discusses three distinct stages of implementation: the first stage will be from 2024-2029, second will be2030-2034 and finally 2035 and beyond. With the progression of each stage, the allowable carbon emission limits will decrease, making the terms of the law more stringent over time which will increase the responsibilities of building owners. The first stage (2024-2029) is aimed at the worst 20% of the buildings, meaning not everybody is going to be severely impacted. This does not spill over to the second stage (2030-2034) where most people will be impacted.

Non-compliance is accompanied by harsh financial penalties that will worsen progressively with the passage of time. For example, a one million square ft. commercial building (under the designated category), just 10% above the permissible limit of 2024 will be fined at $230,000 per year between 2024-2029. Upon entering stage two (2030-2034), the permissible limit will be further reduced by 50%, equating to a total of $1,200,000 per year  between 2030-2034. Realizing the sheer rigidity of the law, certain alternate paths of compliance are allowed for relief through Renewable Energy Credits (REGs) or Greenhouse Gas offsets.

The law is criticized to be rather “aggressive” with its “lofty” goals. However, the city is open to adjustments for certain properties. On April 12, 2021, the Department of Buildings started accepting applications for the adjustments  of a building’s annual carbon limits from 2024-2029. The deadline to apply for buildings with high emissions intensities, non-profit hospitals and healthcare facilities has lapsed. All guidelines can be found in DOB’s technical filing guide on their website. Also more outreach and education is planned out for building owners, designers, and operators.

There is a saying “Rome wasn’t built in a day”, and this applies to keeping building’s carbon emissions below the limits. In the next 2 blogs, we will explain how Local Laws 84, 133, 95 and 33 were developed to help building owners and tenants evaluate their building’s energy performance at entry level.