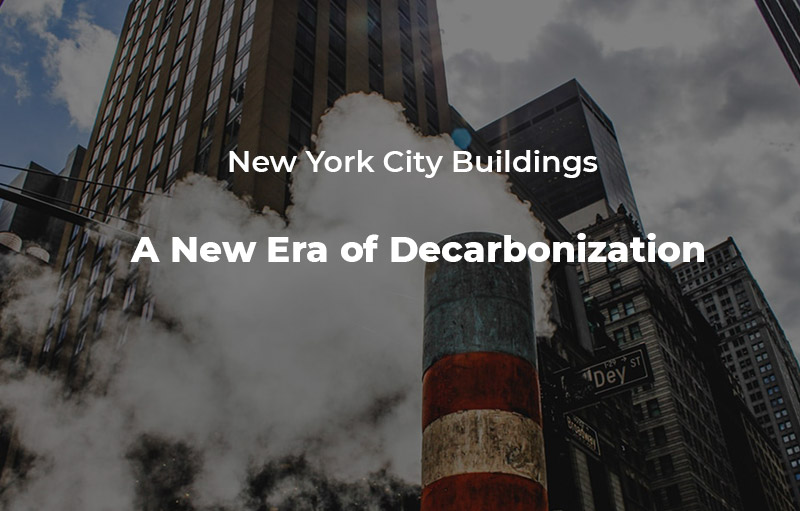 09 May New York City Buildings – A New Era of Decarbonization

Posted at 22:02h in GHG Emissions by admin

We recently crossed the one-year anniversary of the passage of perhaps the most ambitious law ever adopted by New York City to reduce carbon emissions from buildings.

Local Law 97, one of 10 bills in the Climate Mobilization Act, requires New York City’s 50,000 largest buildings to reduce their carbon emissions by 40 percent by 2030 and by 80 percent by 2050. Non-Compliant buildings will face multimillion-dollar fines starting from 2024.

How can one comply with these laws and what are the implications of these laws? Read on to know more as New York City enters A New Era of Decarbonization

What is an Energy Audit?

An Energy Audit is the process of identification, survey and the analysis of Energy usage in a building. Its purpose is to optimize the energy usage of the system i.e. Keeping the outputs the same while reducing the energy consumption. A successful energy audit results in energy and cost saving while also reducing the overall carbon footprint.

During an energy audit, health and safety are the primary concerns, while reducing energy consumption and maintaining human comfort. An energy audit seeks to prioritize the energy uses according to the most cost-effective technique while keeping in mind the comfort levels.

Under Local Law 97, buildings larger than 25,000 square feet are required to meet emissions caps beginning in 2024. The 50,000 covered buildings — out of 1 million total buildings in New York City — account for about 60 percent of both the city’s floor area and building emissions.

Local Law 97 has to be universally accepted by the building owners. In case of non-compliance, Building owners face fines of $268 per ton of emissions above their designated cap beginning in 2024. Fines could reach as high as $5 million annually for individual buildings.

The majority of existing buildings have not undergone any type of commissioning or quality assurance process. Additionally, over time the facility requirements change and the operational efficiencies of buildings tend to degrade. Because of these factors, many buildings are performing well below their potential, use more energy than necessary, and cost more to operate than they should.

Retrofitting is the most cost-effective way to reduce Energy Usage and make your building Energy Efficient, save money and increase your property value.

There is only so much time left, so understanding your equipment, how your building consumes energy is important. You need to fix what is deficient to be efficient.

The Cotocon Group has various resources, video guides and experts that you can explore to understand the latest laws and take immediate action.

If you are a building owner who is looking to get compliant, get in touch with us today. The Cotocon Group has 10 years of expertise in Local Law Compliance, Energy Audits, Commissioning and Energy Efficiency Solutions.