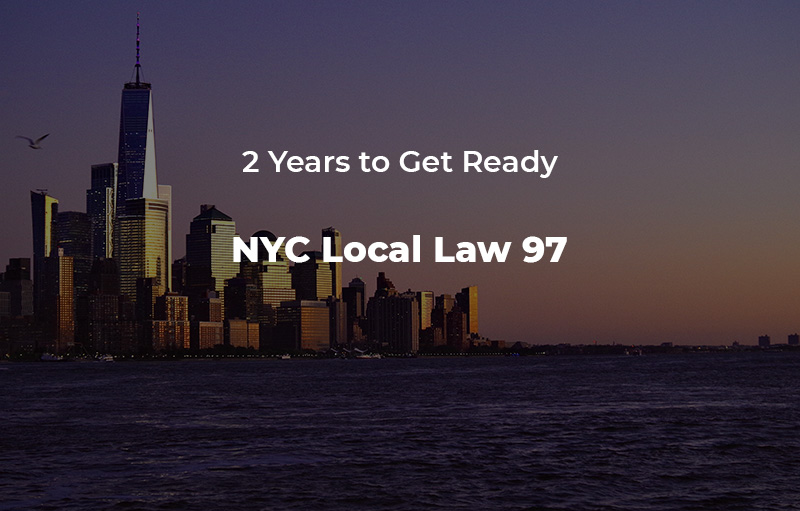 The Climate Mobilization Act is a comprehensive piece of legislation enacted in May of 2019. It was designed to reduce New York City’s overall greenhouse gas emissions by 40% (2030), and upto 80% (2050). With being one year closer to the CMA, it’s high time the city is well prepared to act on the commitments such as the NYC Local Law 97.

GHG is the primary driver of the unprecedented rate at which climate change is taking place. Reducing emissions thus, from buildings is most significant as buildings contribute nearly three-quarters of citywide emissions owing to the consumption pattern vis-a-vis electricity use, HVAC, etc, The legislation with its package of bills aims to evolve these consumption patterns for optimum efficiency and via cleaner energy sources.

To facilitate the ambitious goal, a series of bills were passed. The centerpiece of the legislation is Local Law 97, among other laws. This is the part of the bill which specifically mandates what the greenhouse emissions limits are for each building type. More than 50,000 buildings will get impacted overall. In 2024, about 25% of those will be directly affected by the carbon emissions limit and practically every building in NYC by 2030. A typical commercial office building in midtown Manhattan of 250,000 sq ft. producing over 1.5 tons of stipulated carbon limits will be looking at a fine of over $100,000, and progressively for each year that follows.

Local Law 97 was enacted in 2019 as part of the Climate Mobilization Act to essentially place hard carbon caps on various building types – residential or commercial, that are larger than 25,000 sq ft. The law gets implemented in 2024, only to become more stringent with time to accomplish its grander goal of 80% carbon reduction by 2050.

Many buildings have significantly reported being way over permissible limits requiring immediate intervention with retrofitting and alternative compliance. Exemptions include houses of worship, hospitals, and residential buildings.

Which buildings are affected by NYC Local Law 97?

2. Moreover, making a false statement on a report qualifies as a serious misdemeanor that implies a penalty of $500,000 and/or imprisonment.

3. Failure to file the required annual report within 60 days of the deadline is also deemed penal that bears a fine of $0.50 per square foot of the gross floor area of the building per month which inevitably results in a cumulative fine of at least $12,500 every month for a property 25,000 square feet in size.

The most immediate and apparent benefit is reduced energy expenditure. From problems as small as air leaks that usually go unnoticed but continue to burn pockets, to dangerous health risks instigated by carbon monoxide emissions released by faulty equipment are corrected.

Showing some amount of environmental concern is required from businesses, buildings and all entities now not only from a brand-building point of view, although that’s non-negotiable, also to genuinely address the rocketing carbon levels.

Local Law 97 cannot experience compliance in isolation for its related laws sort of prepare the building to come into a fit condition to comply. These sustainability strengthening initiatives date back to 2009 – Local Laws 84, 87, and 133.

Local Law 87 mandates for buildings over 50,000 square feet to perform energy audits & retro-commissions periodically as part of the Greener, Greater Buildings Plan. The law intends for building owners to remain informed about their energy consumption patterns so as to ideally maximize energy efficiency and slash carbon emissions.

The basic requirements of the law are:-

It is best to work with expert consultants that can design long-term energy and carbon reduction strategies to prepare for compliance and optimize the buildings towards energy efficiency. To know more, contact us and our team of experts will help you out.