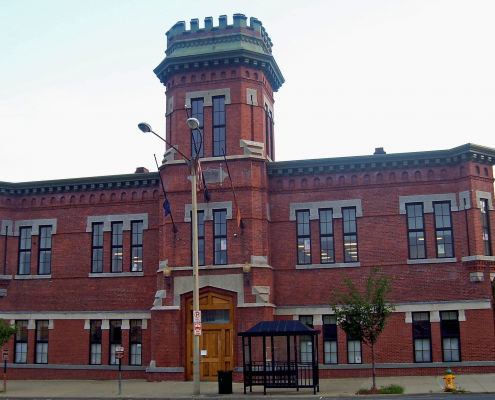 The Newburgh Armory was constructed in 1932 and is located on the south side of South William Street in a quiet suburban neighborhood in the southwest fringes of the city. The armory, built for a cavalry unit of the New York National Guard, is a sprawling, asymmetrical brick complex consisting of a two-story, flat-roofed administration building, a one and one-half story, gable-roofed administration building, a one and one-half story, gable-roofed gymnasium (i.e., a small drill shed), a large, barrel-vaulted drill shed, a tack room wing and a stable wing. All sections are constructed of structural steel framing clad with brick curtain walls and stone trim. Fenestration is each section is symmetrical, but overall asymmetry prevails due to the irregular massing of the various blocks. The remainder of the administration building features numerous small and mid-sized offices and meeting rooms in an irregular configuration. Walls, floors and ceilings are concrete and feature little or no embellishment. Both the gym and the drill shed survive substantially intact and feature steel roof trusses and wainscoted ceilings. The gym retains its original hardwood floor; the drill shed now has a modern concrete floor instead of its original dirt floor. The former stable wing now serves as maintenance and storage space and contains no evidence of its historic function. The Newburgh (South William Street) Armory was added to the Historical Register in June, 1991.