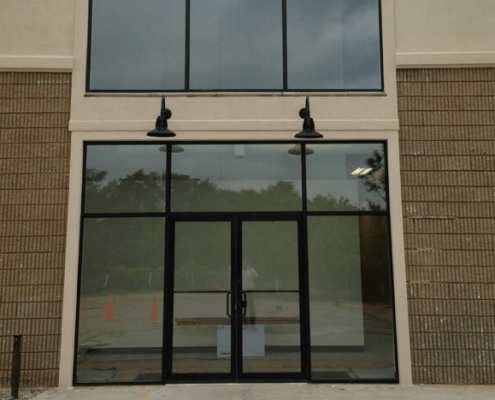 When AJ Caro CEO of Arrow Security decided to take on the challenge of creating a new building on what once was an old lumber yard, he knew he wanted to make the building as eco-friendly and energy efficient as possible, by doing this he knew not only would he be putting Arrow Security at the forefront of a new “Green Movement” but would also be saving money for the company, which would in turn give back to the community.

AJ Caro and the Arrow Security team called upon Jimmy Carchietta LEED AP+BD&C Founder & CEO of The Cotocon Group. After explaining his vision, Carchietta and his team came down and worked to transform this building into a 100% green super high powered office building that will not “Break the Bank in Building” as he quoted. What makes this office so unique is the fact that nothing was overlooked, if it could be made green friendly or energy efficient, it was.

Some of the things The Cotocon Group did, starting from the outside was to start with the cars. Arrow Security recently replaced their entire fleet of security vehicles to more eco-friendly models. To honor this, Carchietta and the team put in priority parking for the entire Arrow Security vehicle fleet, as well as for all employees driving low emitting or fuel efficient vehicles. Now that’s a job perk! Also outside landscapers were hired to plant indigenous trees and plants to help improve the environment, and replace what was once lost.

The building was designed to use mostly natural lighting by placing large 70 x 70 inch windows around the entire building. The glass used for the windows is known as “Low E” glass. This glass product was chosen because it improves building envelope, and saves against thermal heat loss and gain.

Why use natural light your thinking? Not only is natural light good for conserving energy but also it is also good for its occupants. Daylight is also known to be better for the eyes, and also improves morale and mood. Not only is electrical lighting responsible for a significant amount of the electrical load on a commercial building, but it can also cause excessive cooling loads. Utility costs for a building can be decreased when using natural light. Solar panels also line the roof of the building creating an on-site renewable energy system thats was half paid for by the LDC.

Inside the building the list goes on, no stone goes unturned. Literally everything that could be done to create this green office powerhouse has been done. Let’s start with the floors; the flooring throughout the building is made with non-contaminant organic compounds. This is also referred to as “Non-VOC” flooring. They are also hypoallergenic.

Installed is a state of the art, high efficiency HVAC system. Here is where things get “cool.” This new system has programmable controls enabling the building to pre-program according to day/night, holidays and weekends. This will save hundreds of thousands of dollars in heating and cooling costs, and the owner can see what is going on at his building every single day on his mobile phone. The air quality in the building is the unsung hero and has surpassed building requirements.

The walls of the building were constructed with spray foam insulation, to keep the building naturally warmer in winter, and cooler in summer. A high efficiency hot water heater was installed, as well as water conserving fixtures throughout the building. Wait, that’s not all, Carchietta and the Cotocon team did not stop here. The bathrooms were the last step. How to make a toilet “green?” in this case not literally. Well you install dual flushing toilet bowls. These are interactive toilets designed to conserve water. The Environmental Protection Agency (EPA) reports that by the year 2013, an estimated 36 states will experience water shortages as a result of increased water usage and inefficient water management from aging regional infrastructures. Using less water to flush liquid waste makes sense, but in the United States there may be cultural biases that make accepting a more hands-on approach to personal waste harder to accept (source: Safe Plumbing).

It should also be noted that all the materials used in the greening of the Arrow Security building were all regional materials, and were purchased within a 500-mile radius. Arrow Security and The Cotocon Group‘s vision was not only to be a more energy efficient facility, but to also stay local, because every energy dollar saved means more dollars to help improve our schools; communities; roadways and infrastructure; better our lives and create jobs.