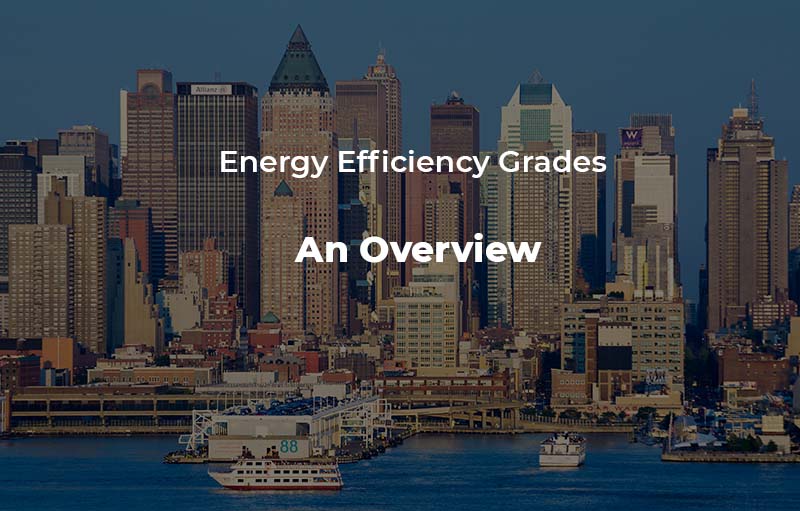 Posted at 10:00h in Energy Efficiency by admin
0 Likes

With half of the New York City’s buildings declared “Energy Deficient”, an amendment of Local Law 33 of 2018 was carried out by introducing Local Law 95 of 2019. The law now mandates buildings over 25,000 square feet to submit a benchmarking report annually to the Department of Buildings (DOB), so that they can get graded on their energy efficiency. This was executed as part of the Mayor De Blasio’s Green New Deal, which aims to thoroughly comply with the goals of the Paris Agreement. The first set of grades was released on October 1, 2020 and buildings had 30 days to post their grades “in a conspicuous location near each public entrance” to enhance public participation. Failure to do so resulted in a fine of $1,250.

What does the letter grade mean?

The benchmarking report indicates a building’s energy and water usage as of previous year. It also generates an energy efficiency score and a letter grade. The grades are categorized as below:

A building that did not submit the report will automatically receive an energy efficiency grade of F. If a building cannot obtain a score or  is exempt with containing data center, trading floor, television studio that cumulatively exceeds ten percent of the gross square footage will receive an N.  According to the Local Law 95 of 2018, only buildings that fail to post the grade will face a penalty. However, starting from 2024, Local Law 97 will mandate owners to pay fines at $268/ton annually for the over-limit Greenhouse Gases their buildings emit. This means a building owner could face multi-million fines with a poor energy efficiency grade in near future.

The DOB releases new grades every year on October 1. It is recommended to work with an engineer, a benchmarking specialist or a consultant for accurate results. The grades help building owners gauge where their buildings stand comparing to other buildings of the same type. They also encourage owners to consider long-term cost savings opportunities.

The Real Deal magazine reviewed DOB’s released grades and found that 43% of the covered buildings received D, 15% received A B & C and about 10% received F.. These grades received mixed responses and feedback. Some landlords complained the unfair rating whereas many others took it as an opportunity to upgrade energy efficiency for their buildings and increase the value. For example, the Durst Organization, whose portfolio spans over 10-million square feet in New York resorted to immediate retrofitting measures by installing brand new HVAC system & energy-efficient windows.

The energy efficiency grades may continue to face mixed feedback, but they were created to encourage energy-efficient retrofits and eventually meet the carbon reduction goals set by the New York Climate Leadership and Community Protection Act. As the Department of Buildings Commissioner Melanie La Roca puts it “the grades are a tool to give New Yorkers a clearer picture of where building owners stand when it comes to building a more environmentally friendly city. The public has the right to know which large buildings are taking their commitment to sustainability seriously.”

In the next blog, we will explain how the benchmarking report is generated and how owners can use it as a tool to diagnose their buildings for improvements. For more details on NYC Energy Efficiency Grades or the compliance, contact us.